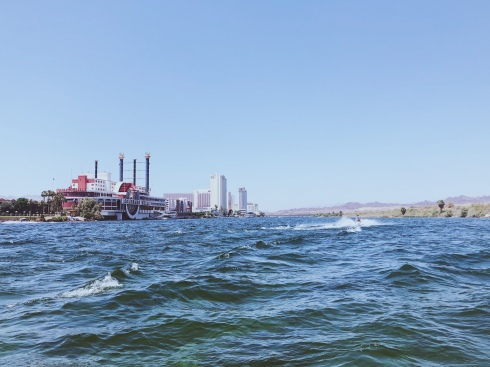 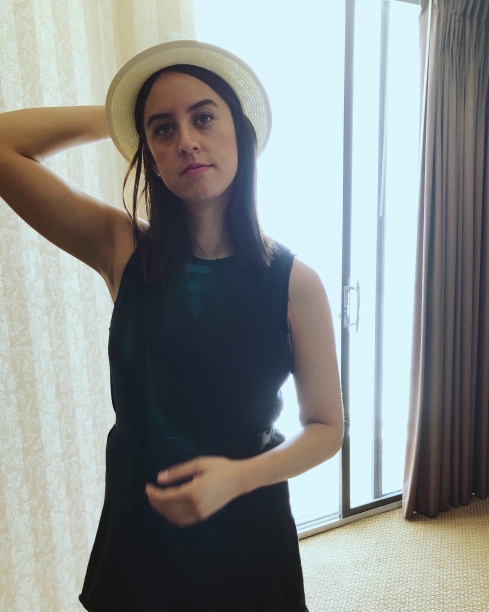 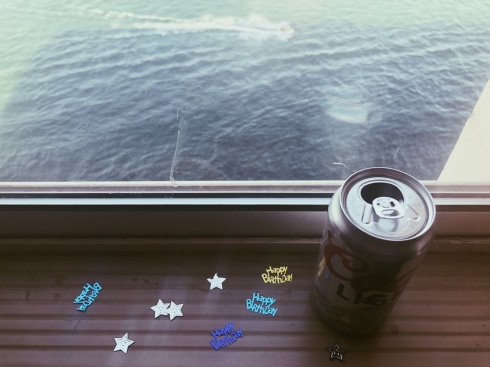 How and when this happened, I don’t know, but as we walked through the casino floor on Saturday night, I had a revelation – this is how America see’s itself. Not in the glitz and shine of places like New York, LA, or Vegas, but in the roughness that this land still holds onto. That it can’t seem to shake. You can see it in the eyes of the people sitting behind slot machines, standing in elevators, serving you food at a restaurant.

Bordering on the edge of obscurity, yet still bound – stitched together might describe the situation more accurately – by the deep current of capitalism which feeds the machine. Helps it grow, regardless of circumstance, and breathes a sense of order into the most minimal of resources. And people come from far and wide to see.

It plays the hand that it’s dealt, and even though it’s not pretty, it still tries.

It’s founder, Don Laughlin, owned an early piece of the Vegas pie – the 101 club in the sixties – and one day, while taking a survey of this region, looked down from his airplane and saw this, where the mighty Colorado river separates Nevada from Arizona, and the potential for so much more. He bought and gathered and built and the neighboring town of Bullhead City, AZ grew with the industry from new casinos along the rivers edge. A thing was started and what was once nothing became something.

On a night like this, old Cholos from Gardena – still in love with their hynas, still down for cruising Whittier Blvd – two step to Ice Cube as if that feeling had never disappeared, just went away for a while. Someone with a Raiders jersey talks to someone else in a white T-shirt and a Dodgers hat in front of a bucket of beer. This is the extension of Saturday night backyard parties. A tall and thin blonde lady – almost too tall and too thin – dances between a man wearing a basketball jersey and a fedora, and her much shorter brunette friend.

Watching all of this unfold is like watching a tightrope walker make a journey between two buildings. You hold your breathe and hope that he doesn’t fall, yet a secret part of you, kept well hidden until moments like these, hopes that he does.

I don’t know what I was expecting when I first got here, but I was open to the strangeness of a new and off the radar sort of experience, after all who goes to Laughlin to look for culture? But I’m glad that I found it, glad that it exists. Glad that someone said, Fuck that over there, and this is mine and made something out of it.

It’s weird and barren and sits at the base of a large valley, surrounded by a martian range of jagged rock, but it exists. People agreed to take the time to make it happen.

Saturday afternoon was spent wandering through old Casinos and some important things came to me. First, why are people here? And second, why am I here?

A pool at a friends hotel, where we went to cool down, was filled with families – black and white and brown – each under their umbrellas and with varied collections of drinks and snacks and music for their experience.

We stretched in the sun and laid out, getting the color that we deem necessary in our search for better health.

After this, a buffet that had a sliver of every culture represented and two margaritas per person was our destination. I walked into it with a can of Coors Light in my right hand and waited behind a red rope to be seated and no one batted an eye.

The margaritas got to us a little too quickly, so back in the room, we slept until dark and then made our way down the riverwalk and through hotels, now bursting at the seams with lights, to a club at The Golden Nugget. This moment is when things began to make sense. It’s one-hundred degrees at ten o’ clock at night.

On Sunday morning, we rented a wave runner from Malow’s on the Boulder City side of the river, and zipped around for a bit until we headed downriver to another stretch of hotels.

Nat drove and kept it steady and we watched the structures change from large planned environments to orderly  well-kept houses to mansions to nothing, back to wild again. On the water, everything that happened here had a purpose, and it was because of this. This river turned a guess into a question and that question into an answer.

I had a conversation with someone at the buffet table, and he asked me if I thought that these people – the ones who started this place, the ones who still live here, the ones that want to live here – pitched their tents too early? I thought about this while chewing through a piece of tough steak and then replied, absolutely, but what do I know? I am on a high horse and I come from a big city.

From the point of view of the wave runner, there were the visible remnants of half completed dreams on either side of the water, but there were also examples of those who finished and who now live with the simple task of enjoying what they have and taking pride in it. Even if it was hard, there was no giving up.

At a beach stop, outside of a hotel called the Avi, about 20 miles from where we started, we parked the on a shore filled with people hanging out under their canopies, as if it were any other Sunday at the park. Music in Spanish came out at full volume from one somewhere in the shade, and we headed toward the building, out of the sun.

In the food court, like any court in any mall, standing in line for Panda Express, we had a conversation with an older black lady who moved here from LA when she retired in 1999. We never asked her name directly, but she handed it to us freely, with no hesitation, in a story about her grandkids and how they keep in touch with her and how she enjoys watching them grow together.

We asked about her family and she told us names and ages and events. Grandma Pearl. She told us that she loved people, young and old, and that she’s glad that her grandkids are doing so much better than she imagined and that her children are educated and visit Mom when they get the chance. She told us about how you couldn’t have nice things in the part of the city where they all grew up and that this place, minus the heat, is better.

Before she went off to her Sunday Bingo game, she offered to pay for our food and we knew that she wouldn’t take no for an answer, so we thanked her and obliged the courtesy. At the register, Grandma Pearl told the girl behind it that she still needed to bring those See’s candies for her. Kelly smiled and said Thank you.

We ate slowly and talked a little and when we were done, while we were figuring out what our next move was going to be, Natalie opened her fortune and read aloud some words about Charisma, and then I opened mine and it said something along the lines of, Work harder for the things that you want. I kept that in mind.

Driving home later, through the desert during the peak of a blazing Sunday afternoon, searching what looks to be an almost endless highway beaming into the horizon, I think about how I’m just about to hit my stride.

This site uses Akismet to reduce spam. Learn how your comment data is processed.